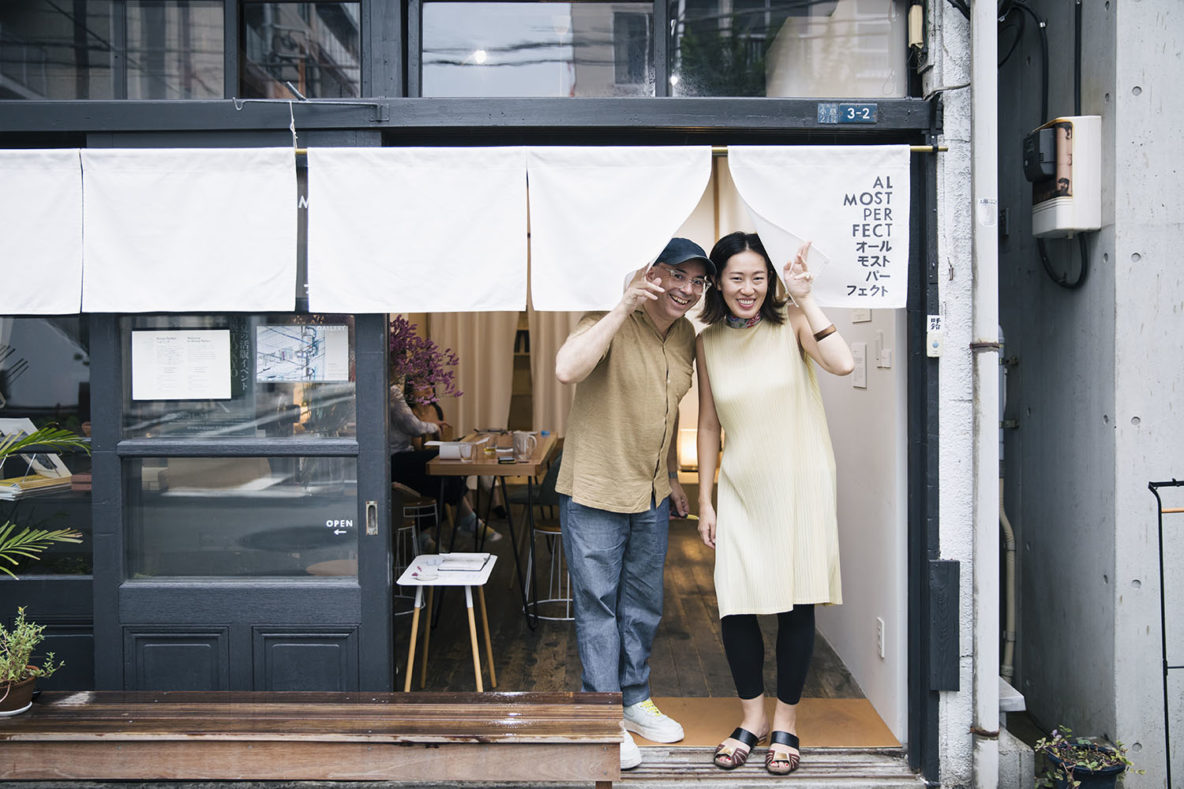 He’s a romantic, she’s a pragmatist. He’s the creative type, she has a mind for numbers. He’s the self-proclaimed “clown”, she is elegant and soft spoken. In every aspect of their professional and personal lives, Luis Mendo and Yuka Okada Martín Mendo seem to complement each other perfectly. Or to use their own slogan, almost perfectly. While they may be quite different in some regards, Yuka and Luis also have much in common. They share a passion for sustainability, and both left high-profile jobs in order to pursue their passions and a slower, more fulfilling life. Spanish-born Luis worked for over two decades as an art director in Europe before coming to Japan, where he now makes a living as a freelance illustrator and graphic designer. Yuka quit a job in finance to enter the ethical fashion industry, even running her own brand for seven years. Now, the pair have merged their respective strengths to establish one of Tokyo’s most unique artist spaces. Opened in October 2018, Almost Perfect is a creative residency aimed at the many people each year who come to Tokyo in search of inspiration. Illustrators, musicians, creative directors, theatre people, writers, and other types of creatives from around the world not only stay in the renovated, century-old rice shop, but they can also create in the studio and show their work in the gallery. The building that houses Almost Perfect was constructed in 1924, and three generations of the same family lived upstairs and sold rice from the shop until shortly before Yuka and Luis arrived. The renovations were conducted on a shoestring budget over just six weeks, and many of the building’s original features—including the rice mill—remain. “That’s also why the name is good, because if something isn’t quite right we can always say, ‘We’re not perfect, we’re almost perfect. Sorry that we don’t have a Herman Miller chair, but at least we don’t have Ikea,’” Luis says with his characteristic laugh. Yuka and Luis are masters of repurposing. A carpenter friend of theirs used an old shelf from a kimono shop to convert an electric piano in the gallery into a desk when it’s not being played. Upstairs, a cupboard that was formerly used to store futons—and as a child’s bed when the original family lived in the house—is now Luis’s worktable. “We have a policy in buying things. If we can’t upcycle or recycle something, the first thing that we look for is local producers. Whatever we find locally, as long as it is affordable, we go for it,” Yuka says. “And if we can’t find anything in this area or Tokyo or Japan, we go for organic things or something with a sustainable background.” This policy has resulted in an eclectic mix of items throughout the space. Beds from Muji, lamps found at second-hand stores, ceramics bought in the nearby “kitchen town” of Kappabashi, and an outdoor shower on the third-floor balcony (Luis’s favourite feature of the building) all live in harmony … END_OF_DOCUMENT_TOKEN_TO_BE_REPLACED