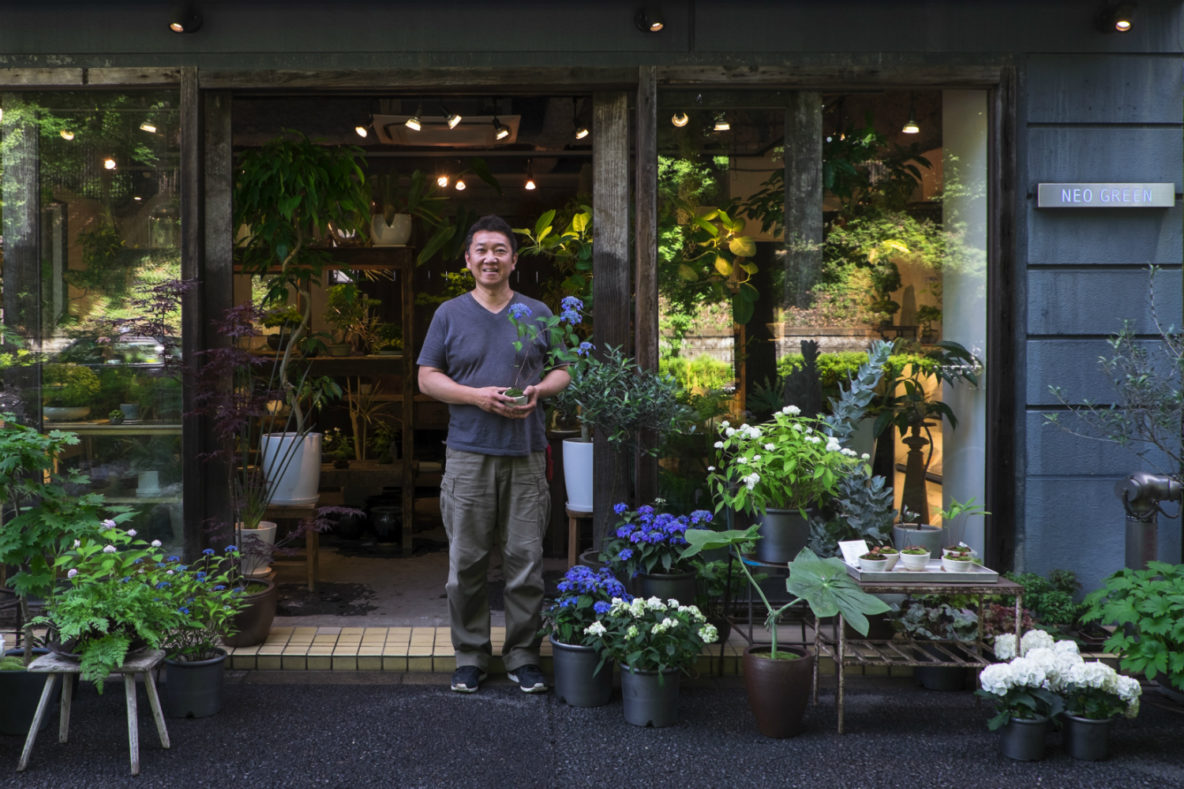 Hitoshi Shirata’s plant and bonsai store Neo Green is neither large nor ostentatious. Yet it frequently stops passing pedestrians in their tracks. Along an unremarkable grey stretch of Tokyo tarmac, his carefully pruned and beautifully potted selection of nature’s own designs is powerfully incongruous. “People in this city need more green in their lives,” says Shirata. Only three per cent of Tokyo is given over to public parks and other green spaces, compared with 38 per cent of London. The decision to open Neo Green in 2007 came when Shirata was forced to stop and reflect on his direction in life. He was a fashion entrepreneur whose businesses were turning over hundreds of millions of yen each year. He had reached a position that most would call success. But Shirata was less certain about what he had really achieved. Life, he felt, was slipping out of his control. “The little company I had started in 1993 with my father’s help had become too big,” he says. “When my father died, I had this yearning to do something new.” Not for the first time, family tragedy had impressed on Shirata the importance of regeneration. He remembered the moment when, as a 12-year-old boy, his grandfather passed away, leaving him the responsibility of caring for his beloved rooftop garden. “I think that was the first time I fell in love with plants,” he says. “Cut flowers are wonderful, but they are normally bought for an occasion and then thrown away. Plants live on.” Shirata is a skilled, self-taught bonsai artist whose lack of formal training allows him to take a fresh view on this tradition-bound art. On the shelves of Neo Green, a 30-year-old miniature zelkova sits alongside palm-sized pines fashioned to look like Christmas trees. Traditionalists would balk at this, but to Shirata such innovations are the bridges that can connect bonsai with younger generations. Ever the tech-savvy entrepreneur, Shirata maintains a database of every customer and what they have purchased. If a plant, separated from his masterful touch, starts to show signs of fading, he can instantly pull up exactly what was purchased and when, in order to give the customer the best possible care instructions. More recently, people have started taking smartphone pictures of their plants and sending them to the shop for a visual check-up. Shirata doesn’t mind – working hand-in-hand with his customers to care for their plants is crucial to his mission. “If we care for them, they give back to us,” he says. “It’s all about partnership – between myself and my customers, and between human beings and plants.”

“Wherever you go in the world, there are always coffee shops near parks. Parks and coffee shops – they compliment each other. They’re places where people congregate,” observes Daisuke Hamada. “But that wasn’t so true of Tokyo, which is why I chose this place.” Hamada is referring to Little Nap Coffee Stand, his diminutive shop beside Yoyogi Park. One of the largest open spaces in Tokyo, the park is the city’s unofficial playground, used for early morning jogs, dog walks and outdoor yoga. During cherry blossom season, the grass becomes a patchwork of parties celebrating the arrival of spring. In the evening, sounds fill the air – a violin here, a saxophone there – as musicians use it as a place to practice. Little Nap is housed in a slither of a building squeezed between an offshoot of the park and a railway line. Every time a train passes by, the shop rattles a little. It’s a sensation Hamada says he has learned to love because, “it’s just the rhythm of the city.” The location is more auspicious than it sounds. Across the tracks is one of Tokyo’s most boho suburbs, home to young families with money and taste, and with – one might guess – more dogs per square mile than anywhere else in the city. Little Nap is en route to the park. “The shop is supposed to be a place where you can drop by for a break in your day,” says Hamada. “It’s like a siesta – but with coffee.” Hamada’s love of the bean was planted by his father, but nurtured during a trip to Italy while working for a company that imported espresso machines. His first café was a disused shop in rural Toyama, his home prefecture northeast of Tokyo, and he decorated it simply with the help of some friends. Years later, and having long-since relocated to Tokyo, Hamada opened Little Nap. The distinctive logo, inspired by his love of vintage typography, is what most will notice first, and yet it’s the more no-nonsense type saying ‘Coffee Stand’ that he deems most important to its look and feel. “In America, you see signs on the side of the highway that just say ‘Restaurant’ or ‘Coffee’,” he says. “You don’t even know the name of the place, but that doesn’t matter. You’re just being told what it does, but the sign somehow has the ability to make you feel something.” With his scruffy beard and Salvador Dalí-esque moustache, Hamada is clearly at home in his self-made surroundings. Consciously fashionable, he has a nonchalant air that masks a keen mind for both the business and the science of coffee. “I customised my espresso machine,” he says proudly. “I changed the pumps, water lines, and temperature settings – it was like pimping up a car.” The changes, Hamada maintains, make the machine easier to use when he’s busy, and allow him to tweak the flavour of what he serves – finessing this begins when he arrives … END_OF_DOCUMENT_TOKEN_TO_BE_REPLACED