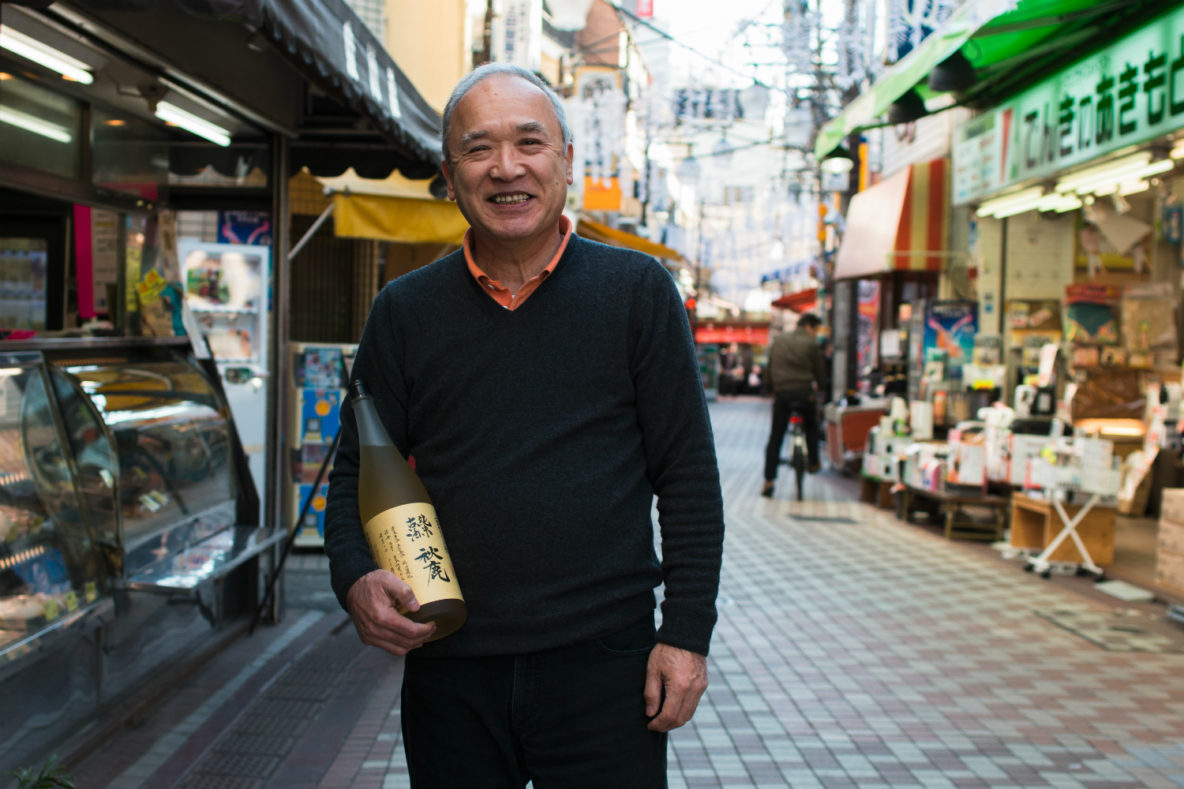 “If restaurant owners want to do a deal, I have to know they’re good people.”

Honma Saketen is not for everyone. In truth, it’s for rather few people. Proprietor Fujio Honma doesn’t sell any of the delicate, fragrant stuff that most people think is sake – superficial he calls it – and he refuses to stock anything by Japan’s best-known breweries. “Those big guys are motivated by profit,” he says. “But I search for people with this…” he says, and he pounds his fist against his heart.

Honma buys from just 20 artisan makers, and his inventory is a poke in the eye of sake orthodoxy. Take the conventional wisdom on polishing rice: it’s said that the more you mill, the better the resulting sake. When a brewer strips away 40 per cent of the grain, he can call the drink ginjo (literally: ‘brewed with care’). If he removes at least 50 per cent, he’s making daiginjo (‘brewed with the utmost care’). So what should be made of Okuharima Yamahai from Hyogo Prefecture? It’s fabulously earthy, with hints of stewed apples and melon – and it’s made with rice whose grain is reduced by just 20 per cent.

Honma says good rice doesn’t need to be polished as much, that the minerals in the outer layers add complexity when you’re ageing a bottle. He’s a fan of aged sake, all dark and pungent with caramel notes, although he concedes it’s still a niche interest in Japan.

More heretically, he likes to mature unpasteurised sake. Textbooks and retailers will tell you the untreated stuff should be refrigerated and drunk within weeks, but Honma disagrees. “Open a bottle, drink a bit to make space for some air, then leave it at room temperature so the yeasts come alive,” he says. “Don’t put it in the fridge or it’ll never develop. You’ll notice a difference after two or three days, but you can leave it for years if you have the discipline not to drink it.”

He says if the sake is well made, with lightly milled rice and lots of acidity, it will develop deeper, wilder flavours. “It goes against all common sense, and I don’t know how it works, but the sake just opens up.”

Honma inherited the shop from his father. At the time it was a general liquor store, but discount retailers were crushing him in the beer market, and he’s never had a taste for wine, so he focused instead on sake. It was a purely commercial decision, until he visited the Shinkame Brewery near Tokyo, tried a 12-year-old brew, and realised there was a world beyond the big, clean, commercial stuff.

He set out to find people who, like him, care more about flavour than finance, sniffing out bold, full-bodied drinks packed with umami. As a result, Honma has an unusually tight relationship with his brewers.

It’s a relationship that he describes as being like a lovers’ bond. They shower him with gifts, like the first option on full tanks of sake, or exclusive rights to very special releases. In return, he never deals with more than one brewery in any prefecture, because it would feel disloyal. And he’s careful about where the good stuff ends up. “If restaurant owners want to do a deal, I have to know they’re good people. I want to know what else they sell,” he says.

Yet Honma’s customers and suppliers say he can be prickly. “Do they really?” he asks. “Well, they’re right. But only if a person comes here acting like they know it all. To those who arrive with an open mind, I’m really very kind.”

Honma Saketen can be found on a local shopping street, and its closest station is Sasazuka. This is best accessed via Keio New line, which is an extension of the Shinjuku subway line. Honma doesn’t speak any English, and sake can be a complicated business, so take a Japanese friend or guide along for the ride.

Honma Saketen can be found on a local shopping street, and its closest station is Sasazuka. This is best accessed via Keio New line, which is an extension of the Shinjuku subway line. Honma doesn’t speak any English, and sake can be a complicated business, so take a Japanese friend or guide along for the ride.