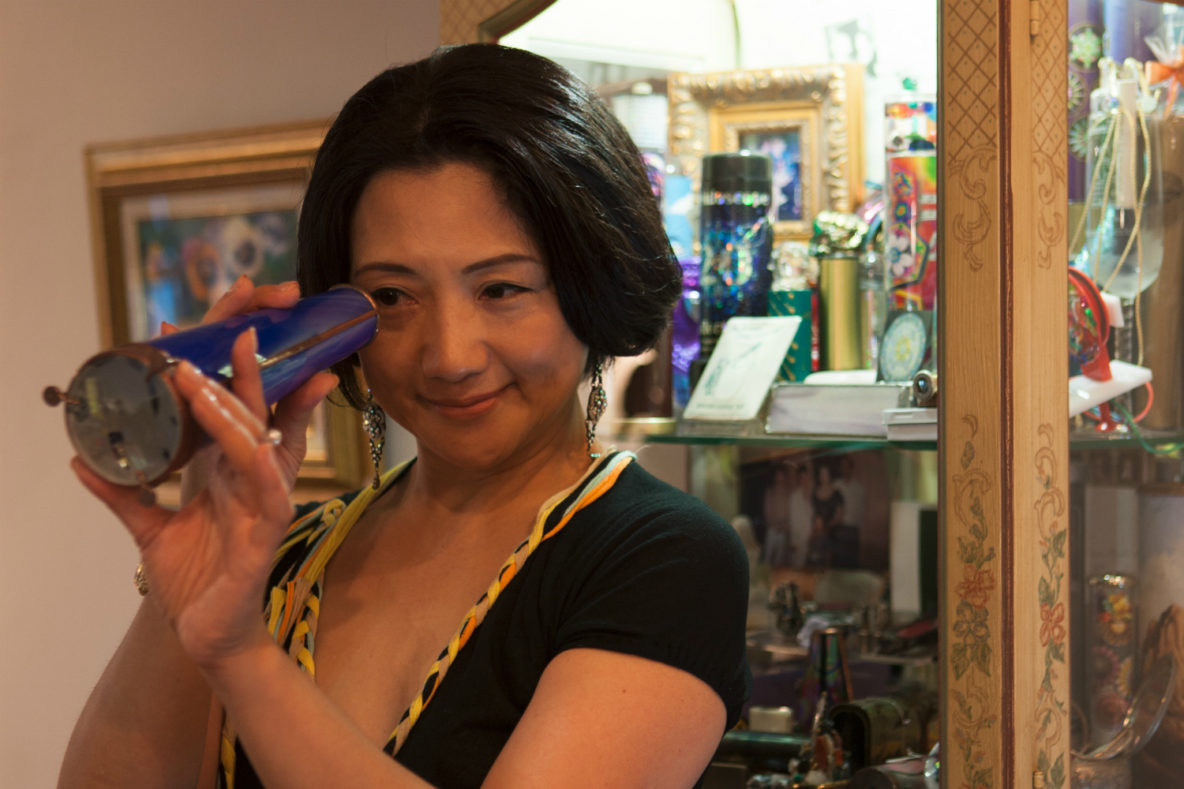 “I believe every time you peer into a kaleidoscope, you see something different.”

The literal translation of the Japanese word ‘mangekyou, ’10,000 blossom mirror’ is such a perfect description of kaleidoscopes that, according to the owner of Japan’s first specialty shop selling them, “Japanese people commonly believe they invented them.” Indeed, if the country feels like a natural home for mementos like these then, rich with nostalgia, refinement and quiet romance, Miti Araki’s store suggests it is so.

Located in Azabu-Juban, a village-like corner of central Tokyo, Kaleidoscope Musashikan has been in business for more than two decades. Back when she opened it, Araki was a recently divorced mother taking care of her daughter, Kiki. “I started to see the world through my little girl’s eyes,” Araki says, recalling moments they spent looking through a magnifying glass or playing with a mirror. “That act of becoming absorbed in something was vital. I had no idea how or what, but I knew I wanted to open a shop based on looking at things.”

Kaleidoscopes were actually invented in the early 1800s by Scottish scholar Sir David Brewster, and soon enchanted the European upper classes. But before Araki opened her shop, all that was available in Japan were cardboard tubes of coloured plastic beads found at souvenir stands. She asked a friend in New York to visit a kaleidoscope specialist retailer there and send as many of them back to Japan as her savings would allow. Before long she had refashioned the café where she worked to become Kaleidoscope Mukashi-kan.

The made up word mukashi-kan means ‘hall of the past’, and Araki’s shop feels like it could be the setting for a children’s fantasy, with storybook furnishings, a wall painted like the sky, and a shop assistant wearing a natty pink jacket. A sculpture outside shows the legs of a man appearing to fall into the unknown, and inside, every shelf and table is crowded with kaleidoscopes.

The simplest model is the open-ended teleidoscope that multiplies whatever it’s pointed at, while others create infinite patterns using spinning wheels, sliding vials of liquid and glitter, or myriad tiny objects, such as microscopic seashells. Those with sleek brushed stainless steel exteriors are made in Japan; the detail of what is in the eye of the beholder is dazzling, thanks to viewing chambers filled with abstract flakes of exposed colour film.

Indeed her own experience of kaleidoscopes has changed. Where once they stimulated her, in the worrying days after the 2011 earthquake, they became cathartic. “I believe every time you peer into a kaleidoscope, you see something different,” she says. “But then, shouldn’t that be true of almost everything in life?”

The shop is open daily and is located a block south of the piazza in Azabu Juban. It’s about 3 minutes’ walk from the subway station. Nearby is Gen Yamamoto, which specialises in creative craft cocktails. It is also featured on PMP.

The shop is open daily and is located a block south of the piazza in Azabu Juban. It’s about 3 minutes’ walk from the subway station. Nearby is Gen Yamamoto, which specialises in creative craft cocktails. It is also featured on PMP.