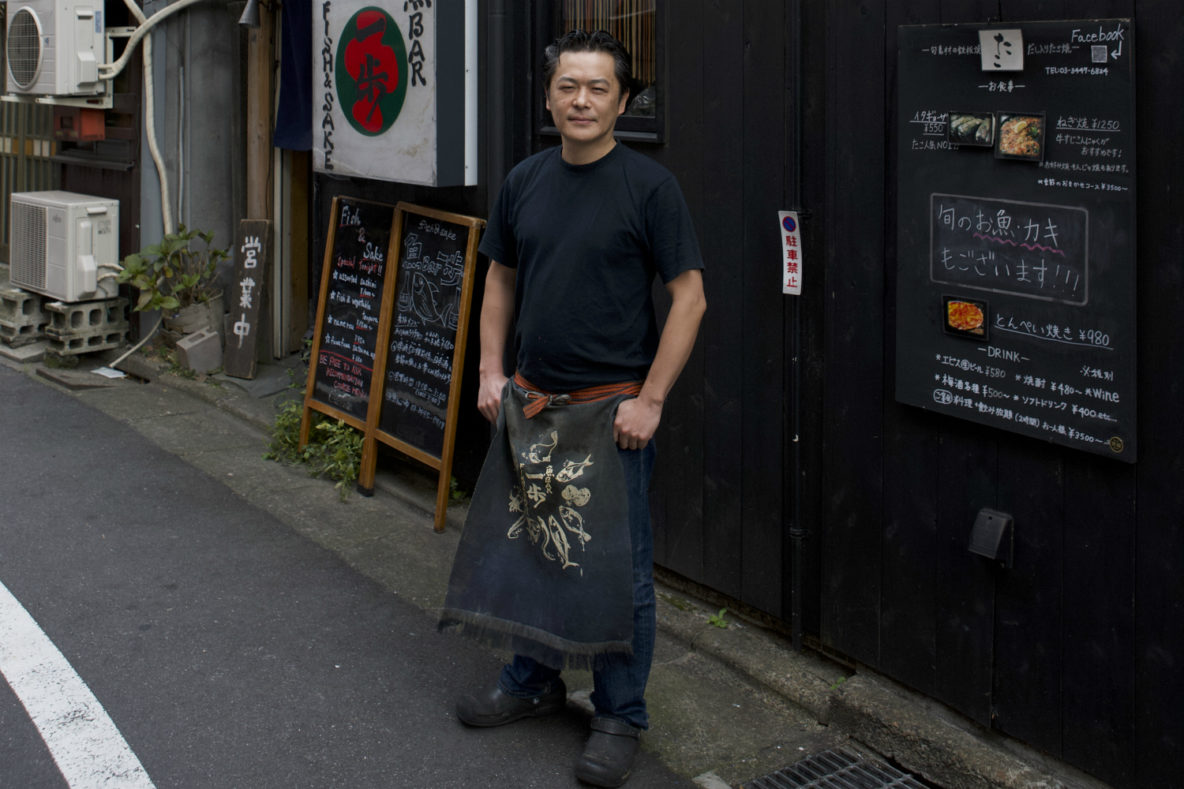 “I’d buy fish at the market to take home and experiment with.”

Silence is rare at Sakana Bar Ippo, a casual fish and sake bar along a quiet side street in Ebisu. On most nights it’s packed by 8pm, the air crowded with a cacophony of chatter, clinking glasses, and bursts of laughter. Before the guests begin trickling in at 6pm, owner Masato Takano starts making a playlist for the evening – a little vintage Rolling Stones, some Beatles tunes, maybe something by the Smiths, then the Stone Roses.

Takano, who writes songs and plays the piano and guitar, wanted to be a musician when he was growing up. But he made a calculated decision to pursue a safer career, and spent eight years working as a stock analyst. Now in his forties, he still peppers his conversation with references to risk and probability.

“Succeeding as a musician is a narrow possibility, so I went to university and studied economics,” he explains, modestly adding that his specialist subject was investment theory.

But childhood dreams die hard, and after spending much of his twenties managing assets, Takano knew he wanted to do more than just make money. By age 30, he’d saved enough to start a small business. To this day, he relishes the moment he told his boss he was quitting finance to open an izakaya.

It was the many evenings he spent in the Tsukiji district, unwinding with friends over sake and freshly caught fish, that gave him the idea for Ippo. “I really appreciated those moments after work,” he says. “I started watching the guys working in the restaurants, looking at what they were doing. Sometimes I’d buy fish at the market to take home and experiment with.”

Ippo’s menu changes depending on what’s on offer fresh at the market. It can include sashimi, grilled fish, even oysters when they’re in season. There is also a selection of specialties, such as Satsuma-age, a variety of fishcake from Kyushu, Japan’s southernmost main island. In Takano’s recipe this is uniquely light and fluffy, a texture onomatopoeically described on the menu in Japanese as ‘fuwa-fuwa’.

Regulars at Ippo order the ‘aji no namero’, a fine mince of raw horse mackerel, ginger, miso, and herbs that pairs brilliantly with sake. The name namero, which literally means ‘to lick’, implies the delicacy is so tasty that customers end up cleaning the plate themselves. Although his Ippo version uses mackerel, Takano based the dish on his grandmother’s recipe for a meal of raw squid. To chop everything together, he uses two cleavers in a rapid, steady tapping motion that adds a staccato rhythm to the aural mayhem.

“Music is still very important to me,” Takano says, selecting a Tom Waits track on his computer as another customer shouts an order across the bar. “But this… This is my soundtrack.”

Seats are usually available early in the evening without a reservation, but bookings are advisable on weekends especially. No smoking seats are available. Last orders at 2am.

Seats are usually available early in the evening without a reservation, but bookings are advisable on weekends especially. No smoking seats are available. Last orders at 2am.