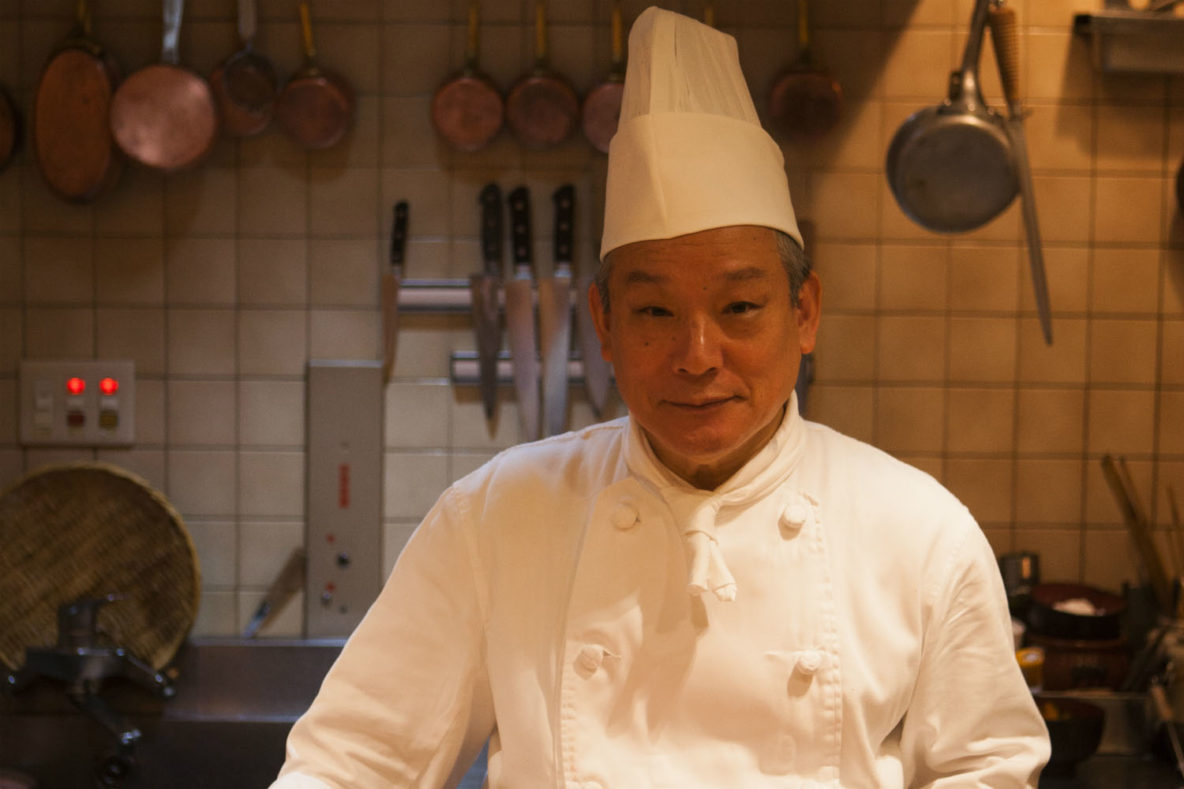 “Japanese farmers raise cows with the same care as they do their children. You can sense that humanity in the product.”

The highest quality fillets of wagyu beef that arrive at Shima come with a certificate of authenticity. The document details the ancestry of the slaughtered cow, with a family tree going back three generations and most importantly, the name of the prized bull that fathered it. Finally, it’s stamped with an inky impression of the animal’s nose – the bovine equivalent of a fingerprint.

The particular fillet Manabu Oshima is preparing for tonight’s customers comes from a cow called Hiromi, daughter of Doi. She was raised, like the chef, near Kyoto. Oshima works with an agent who scours the country seeking calves with good lineage and potential for rearing. Invariably, the animals are from the prized Tajima breed, which originated in the area around Kobe, but is now raised all over Japan and overseas. The beef served at Shima comes mostly from Kyoto, Miyazaki, or Iwate prefectures.

“Kobe beef is famous overseas, but it’s just one type of wagyu,” explains the chef. “Only beef that comes from specific slaughterhouses around Kobe has the right to use that name.”

Oshima slices to release long strings of tendon, peels them off the three-foot-long fillet, and then trims away the fat. When he’s done, about a third of the volume has gone. The tapered end, the filet mignon, will be used to make steak sandwiches for patrons to take home. The majority is tenderloin, enough for about eight 150g cuts sold for ¥13,000 each. The thick end is the more affordable rump steak, served at lunchtime.

Handling meat every day for almost 40 years, Oshima has learned to judge through his fingers. “I can feel if the beef is going to be good or not without tasting it. I can feel if the farmer has raised the animal thoughtfully. Japanese farmers raise cows with the same care as they do their children. You can sense that humanity in the product.”

Wearing a crisp white uniform and classic tall chef’s hat, Oshima operates behind the counter in the open kitchen alongside his son, while his friendly wife takes charge front of house.

The old, hand-written menu reflects the chef’s early career working in Great Britain, France and Germany, with traditional favourites such as steamed asparagus, foie gras, and onion gratin soup. But the menu isn’t the best guide.

“It’s a bit meaningless, to be honest,” Oshima says, laughing. “Just ask me and I’ll tell you what’s good. For example, tonight we have this,” he says, reaching behind him to bring out a boiled cow’s tongue. “And we also have oxtail soup.”
He makes the oxtail soup especially for one of his customers, a 94-year-old regular from Hong Kong. Alongside the occasional sumo wrestler, patrons from overseas make up a sizeable chunk of the clientele at Shima. Many of them come to see Oshima – and to eat his steak – every time they come to Tokyo.

The chef appears humbled by his patrons’ strong loyalty to his restaurant. Especially given that, typically, they’re self-confident types who are well versed in quality. “My customers order the same thing each time they dine here,” says Oshima. “They earn a lot in their work and have eaten at the world’s finest restaurants. They are very fussy. And they’re experts in what I do, too.”

Reservations are most definitely required at Shima – preferably several weeks in advance – and are best made through a concierge or our own members Concierge service as English is not well spoken. The restaurant is open for lunch, when both its menu and its cuts of beef are more limited.

Reservations are most definitely required at Shima – preferably several weeks in advance – and are best made through a concierge or our own members Concierge service as English is not well spoken. The restaurant is open for lunch, when both its menu and its cuts of beef are more limited.