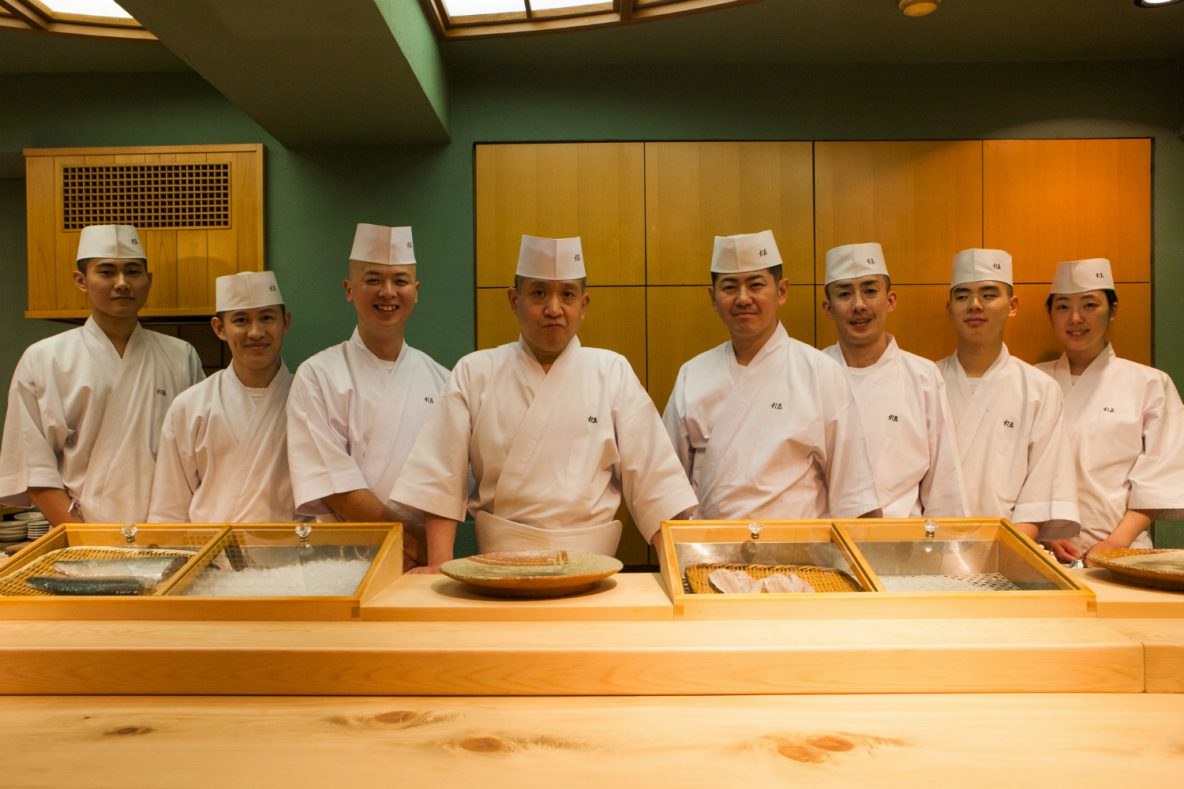 “More than skill, teamwork and communication are most important.”

People who know sushi know Keiji Nakazawa. His name rarely figures on high-profile star-ranking systems, but he is probably the most influential sushi chef working in Japan today – and Sushisho is more than just his restaurant. To his growing band of protégées, it is an academy; to devotees of his cuisine, it is Mecca.

Nakazawa’s philosophy falls within the broad church of Edomae sushi, or ‘sushi in the style of Edo’ (the old name for Tokyo), which in its purest form is the combination of sliced raw seafood on top of vinegared rice. For inspiration, Nakazawa reached back in time to the earliest traditions of Edomae sushi, while at the same time evolving the cuisine in directions that are both innovative and stunning to behold.

For example, modern sushi norms dictate that the fish must be as fresh as possible, yet before refrigeration technology it was commonly treated to make it last longer. Nakazawa resurrected this tradition by ageing, marinating, simmering or searing his seafood to achieve maximum flavour.

He is also fastidious about rice, and uses two different grains depending on the seafood they’re cushioning: simple white rice for simple, delicate fish; and less common red rice for fattier, fuller flavoured species. He varies the seasoning – vinegar, salt or soy – to balance the taste, and famously serves his rice warmer than is customary.

The fixed omakase course service at Sushisho can begin with a delicate slice of cooked squid stuffed with rice and dotted in three places with concentrated soy sauce. It may include a pocket of aji (horse mackerel) filled with threads of ginger, shiso and cucumber. It will certainly include slithers of tuna, yellowtail or squid laden with taste from being aged for days or even weeks. And extras such as monkfish liver lying back-to-back with pickled baby watermelon on a bed of red rice would be a crime to miss.

Nakazawa set his sights set on becoming a shokunin (artisan) of sushi when he was just 15 years old. His journey began on a delivery bicycle, weaving the crowded streets of Tokyo with boxes of sushi piled high on his shoulder. Later, he travelled the country “like a nomad” honing his skills and learning regional traditions and techniques. The sushi world became his family: he lived with the other apprentices, ate and drank with his teachers, and learned to enjoy interacting with customers.

In January 2016, Nakazawa upped sticks and moved to Hawaii for his next adventure, opening a branch of Sushisho in Waikiki. But his spirit lives on at his former restaurant and in the talents of those he schooled in the Sushisho way.

“You can’t run a restaurant alone,” Nakazawa says. “More than skill, teamwork and communication are most important.” He is mentor to several of Tokyo’s most highly regarded young sushi chefs. To them, he is always – even in his absence – called oyakata, a term that combines respect with endearment, marking him out as akin to an honorary father figure.

Personal bonds are what motivate him – between chef and customer and oyakata and apprentice. And when you study to be a good sushi chef in the school of Nakazawa, you graduate an all-round better human being.

You won’t eat here without a reservation and if visiting from overseas, the restaurant prefers that you make your booking via your hotel’s concierge or through the People Make Places Concierge service (which requires membership). Tables are so hot here that, understandably, late cancellations may result in a penalty.

You won’t eat here without a reservation and if visiting from overseas, the restaurant prefers that you make your booking via your hotel’s concierge or through the People Make Places Concierge service (which requires membership). Tables are so hot here that, understandably, late cancellations may result in a penalty.