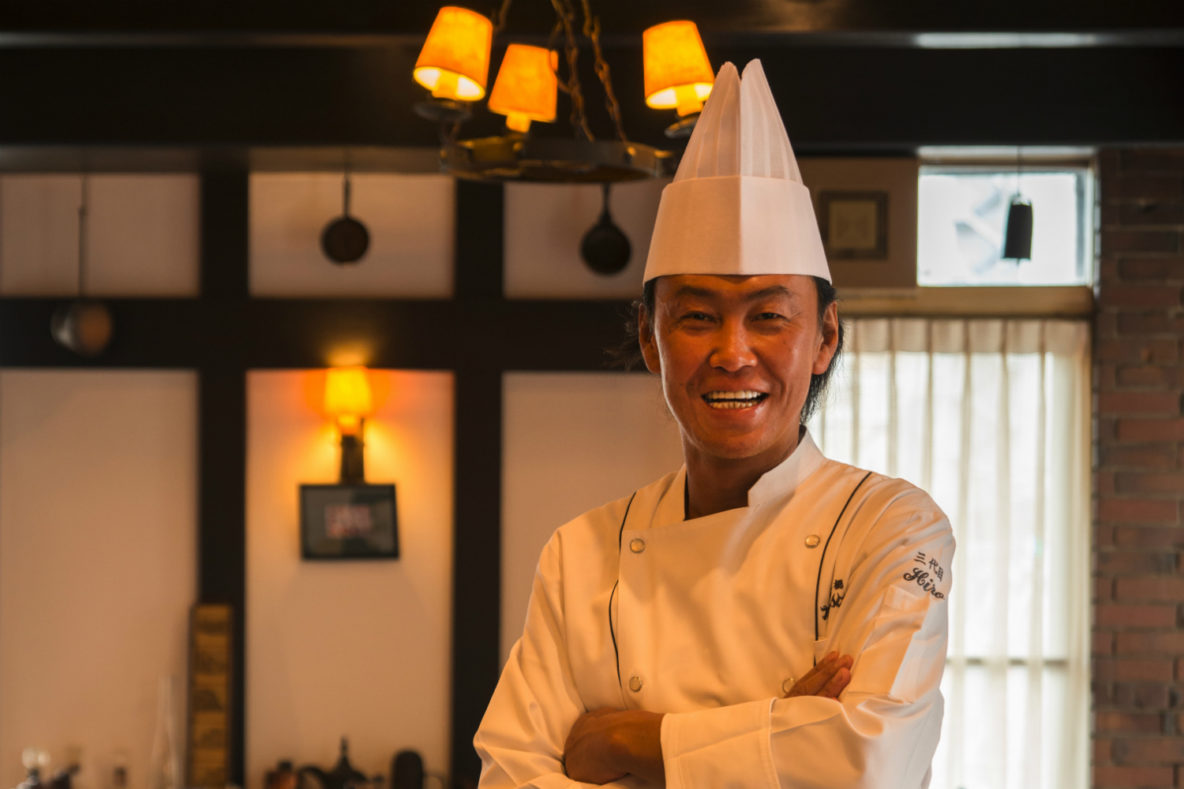 “Our sauce takes a week to make and we start a new batch every day.”

The line outside Taimeiken forms early on weekends – dozens of patrons waiting patiently for an hour, perhaps two. Ask any one of them what they’re waiting for and their reply will be the same: omuraisu.

To the uninitiated, this does not sound like a dish worth waiting for: an omelette (omuretsu) filled with rice (raisu) that’s been fried or seasoned with wine and ketchup, and served with a demi-glace sauce. But slice into it, and a history rich in the idiosyncrasies of modern Japan spills out.

Taimeiken specialises in yoshoku, a curious cousin to Japan’s admittedly varied stable of fare. Literally translated, yoshoku means ‘Western food’ – although few Westerners would recognise its dishes as their own. Its lexicon includes kareraisu, or curry rice, which uses a natively-produced curry that Indians and Brits find extremely mild; hambaagu, akin to a hamburger without the bun; and Napolitan – spaghetti cooked with vegetables and dollops of ketchup.

The restaurant was founded in 1931 by the late Shingo Modegi, a lover of food and kites (his museum of Japanese kites is on the fifth floor of the same building). Today his grandson Hiroshi is in charge of the family business. Hiroshi’s hobbies – surfing and tanning – reflect a different era. But his commitment to the family business is clear.

“When I was a young boy,” he recalls, “I found a letter from my grandfather addressed to ‘The Third Generation of Taimeiken’. I was the eldest son, I knew right then that it was my honour and responsibility to take over the family business.”

The restaurant feels intentionally nostalgic, a throwback to a tumultuous era. In the late 1800s, after centuries of self-imposed isolation, Japan reluctantly opened up to the world. The arrival of the American ‘Black Ships’ had demonstrated the military and economic superiority of the West. Japan’s leaders felt small, both figuratively and – as the Americans towered above them – physically. They were desperate to catch up.

Members of the elite were dispatched to Europe and North America. They returned with lessons to bolster Japan’s military and economy – and it’s cuisine. They believed that if they ate Western food they would quite literally grow bigger. The dishes they brought home were localised, becoming collectively known as yoshoku. They are eaten not with chopsticks, but with knives, forks and spoons, and served in dining rooms by waiters and waitresses wearing quaint uniforms long since discarded by most Western restaurants.

Taimeiken’s menu is a comprehensive collection of yoshoku dishes, including everything from macaroni gratin to beef stew. But its most famous product is its omuraisu, which was featured in the classic Eighties film Tampopo. Other varieties of the dish commonly have the rice contained inside the omelette, but Taimeiken’s ‘Tampopo Omuraisu’ places the egg on top. Eating it involves its own ritual: it is sliced lengthways down the middle of the fat, yellow mound to expose the runny insides, before the demi-glace sauce is poured into its core. “Our sauce takes a week to make and we start a new batch every day,” says Modegi.

It’s true that, from televisions to automobiles to denim jeans, the Japanese are famous for taking foreign things and improving them. But in terms of history, as well as flavour, omuraisu must surely be the richest Japanese reinvention of all.

Reservations are only accepted for the upper-floor restaurant, where only kaiseki (course meals) are served. You can expect a wait for tables in the popular ground-floor canteen.

Reservations are only accepted for the upper-floor restaurant, where only kaiseki (course meals) are served. You can expect a wait for tables in the popular ground-floor canteen.