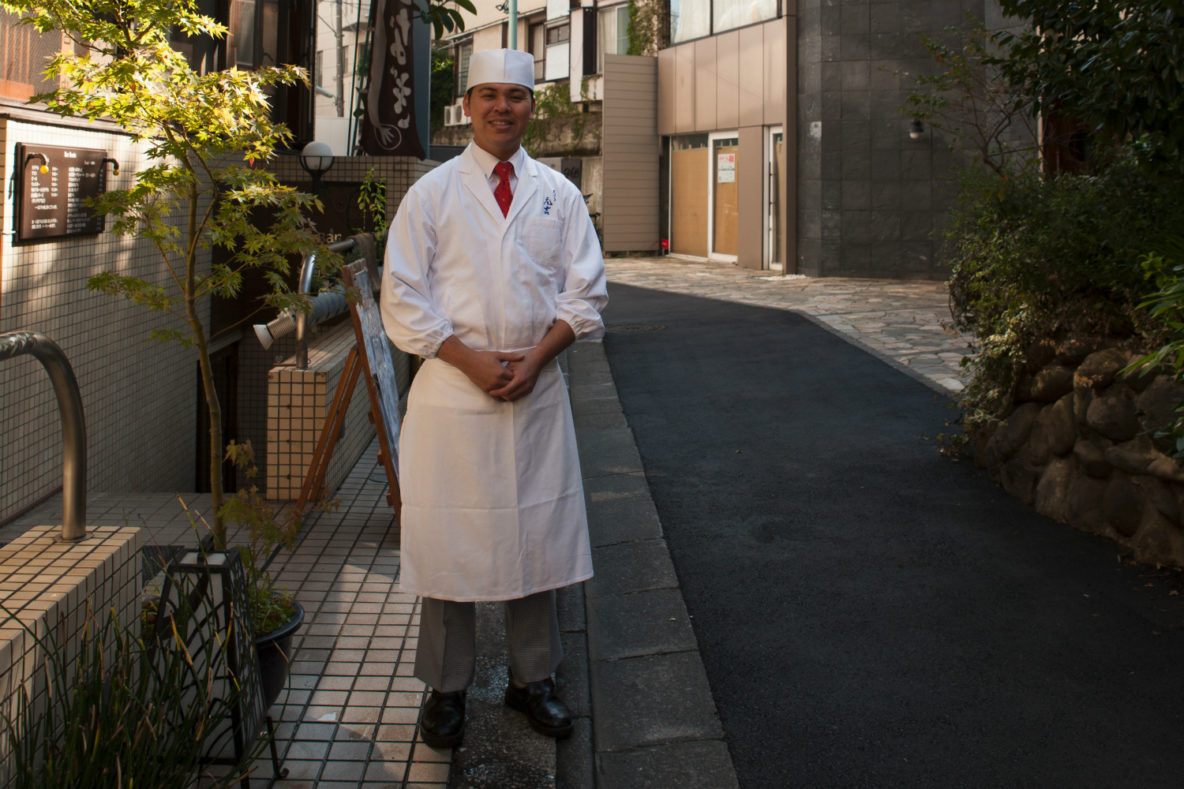 Timing is everything for a good tempura chef. And when Kazuhito Motoyoshi opened his eponymous restaurant, he picked just the right moment.
“Nobody else wanted to cook tempura,” he says. “I’m one of the youngest people doing it.”

Tempura feels quintessentially Japanese, but it probably derives from the cuisine cooked by the Portuguese traders and missionaries that arrived in Japan in the late 16th century. Food historians believe that these settlers made something akin to tempura during times in the Catholic calendar when eating meat would have been forbidden. And these same historians speculate that the name ‘tempura’ derives from the Latin word tempus, meaning ‘time’.

The time in their lives that most adult Japanese associate with tempura is their childhood. The sound of floured pieces of vegetable and seafood crackling as they’re dropped into bubbling oil evokes mother’s home cooking. But as health-conscious grown-ups, many have turned their backs on this staple. It is, after all, deep-fried and it feels a little sinful.

“There is a perception that tempura is unhealthy because of the oil. But it depends on the kind of oil,” says the chef, who is on a personal crusade to restore the popularity of this once-loved strand of Japanese cuisine. “I use a my light sesame seed oil, which is much better for the body and digestion.”

Famous tempura restaurants are normally found in old-fashioned areas such as deeply traditionally cultural Asakusa or tightly politically connected Akasaka. But to lure a new generation of patrons to his shop, Motoyoshi instead chose fashionable Aoyama, keeping his design simple, the lighting subtle, and his opening hours flexible. Taking orders until late in the evening is, after all, more in tune with the rhythm of the lives of the young.

Inside, a glass-fronted box takes centre stage behind the restaurant’s eight-seat counter. It houses a trove of the fresh vegetables to be served each evening. Every ingredient will be expertly prepared, lightly dipped in batter, and dropped into the vat of boiling oil. Every second counts: too few and an asparagus stalk will remain slightly raw; too many and the white flesh of the kisu fish will dry out and break apart.

Three years at culinary school learning the full lexicon of Japanese cuisine gifted Motoyoshi’s tempura is both delicate and visionary. One of Motoyoshi’s most enchanting dishes is his generous assembly of sea urchins, cradled in a finely battered shiso leaf. Every morsel of tempura arrives on a beautiful piece of pottery and a sheet of white paper, folded asymmetrically. Throughout the meal, the paper remains almost entirely unblemished by surplus oil – proof, if it were needed, of the skill of the chef.

Creating this level of perfection requires not only practice and concentration, but also a deep understanding of each ingredient’s texture and composition. Of course, experience counts. But so, Motoyoshi suggests, does his youth: “I have better concentration now than I will do when I’m older,” he says. “For what I do, I think I’m in my prime.”

Tempura Motoyoshi prefers for visitors not to make bookings directly, but via their hotel concierge. Late cancellations unfortunately incur a penalty. The entrance to the restaurant is on a narrow backstreet, so alight from your taxi at the end of the street and amble the last few metres.

Tempura Motoyoshi prefers for visitors not to make bookings directly, but via their hotel concierge. Late cancellations unfortunately incur a penalty. The entrance to the restaurant is on a narrow backstreet, so alight from your taxi at the end of the street and amble the last few metres.