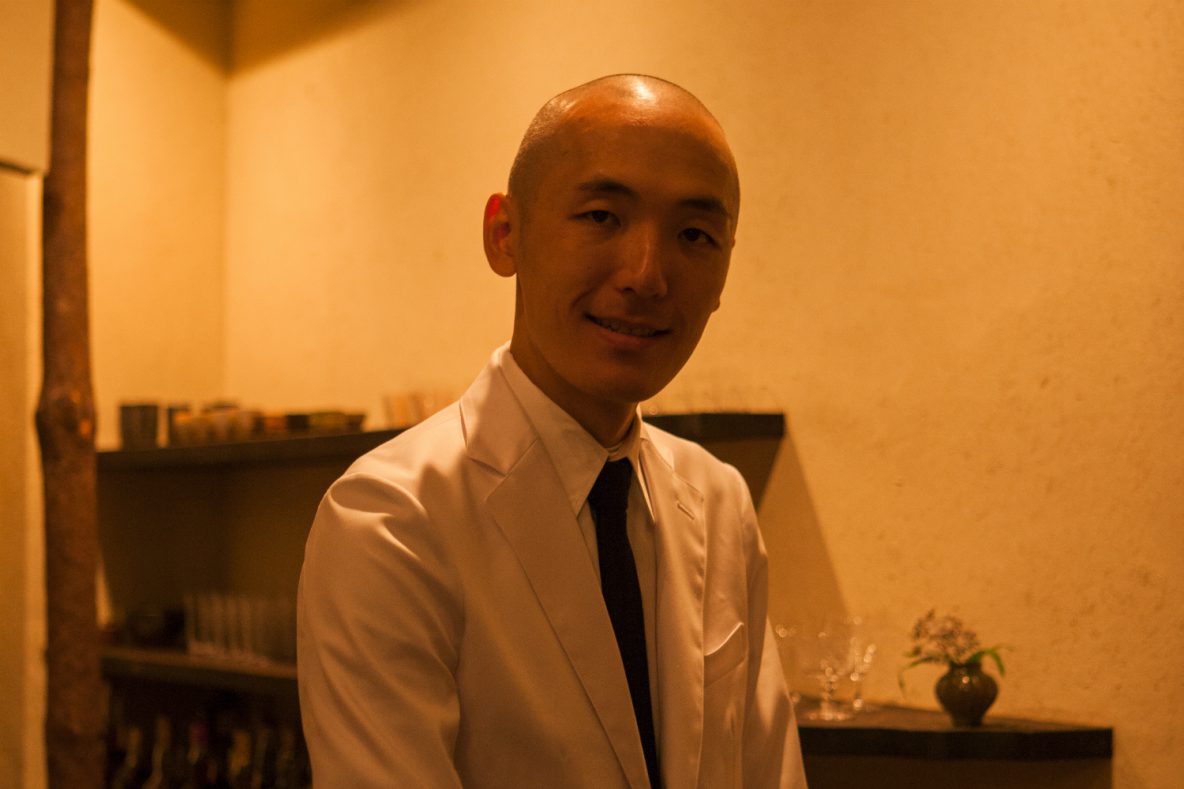 Gen Yamamoto is a classically trained bartender, though you might not guess it. He has dispensed with many of the rudiments of his profession: he never shakes a cocktail; never stirs with ice in a mixing glass; never makes martinis, negronis or anything else you’ve heard of. And his drinks are usually tiny. At his bar, Yamamoto specialises in omakase courses of original cocktails. Guests choose four or six drinks, discuss their aversions or allergies, and leave the details to him. What he serves will depend on the season, the weather, and the time of day. The cocktails are presented on a lacquer tray, beside a freshly misted seasonal flower. The first soupçon is always refreshing, employing an ingredient such as cucumber juice or ginger. The second has more bite, often using Japanese citrus. And then there’s something more powerful again – perhaps with a fruit tomato, and a gin or shochu. The courses build and build in texture and density, to their dessert-like conclusion. There are many bartenders that show the season in their drinks. They’ll use watermelons in the summer or persimmons in the autumn. Yamamoto takes the idea so much further: having forged ties with farmers, he consults with them about what’s being harvested. He says he’s interested in anything delicious, but is more inspired when the ingredient is a little unusual. He buys lesser-known Japanese citruses, such as hebesu, sumikan or hassaku, and has been known to use fava beans, wasabi, celery root, and fennel. He prepares them more in the manner of a chef than a bartender, simmering reductions, creating compotes, and using copper pans and digital thermometers. Yamamoto devised his first cocktail tasting menu in New York while working as bar manager at Brushstroke, a kaiseki-inspired collaboration between chef David Bouley and Japan’s Tsuji Culinary Institute. “When I moved to America, the ingredients tasted different, the ambience was different, and the environment was different. I started to focus on natural ingredients, at first just mixing them with vodka — a vodka apple martini or something like that. It didn’t work. Each ingredient tasted out of balance. So little by little I changed them.” The mixologist questioned everything he had learned. Why does a cocktail have to be chilled? Why must the elements be integrated? Who says a serving should be 70 millilitres or more? And does the alcohol have to kick so hard? He found Japanese-originated alcohol such as sake or shochu often paired better with his produce than 80 proof spirits. He realised that too much chilling could mute the flavours. And he discovered you can have too much of a good thing. “I make a drink with kumquats, for example,” he says. “If it is a large drink, it’s too thick, too heavy.” His style was taking shape, but Yamamoto couldn’t execute it properly in the U.S. “People there worried more about the speed of service than the quality of the result,” he says. So he moved back home to Tokyo and … END_OF_DOCUMENT_TOKEN_TO_BE_REPLACED

“Think about smartphones,” says Hisashi Kishi. “They’re very simple on the surface, but there’s a lot of technology underneath that the consumer doesn’t need to know about. The same is true of cocktails.” Or rather, it’s true of his cocktails. Kishi, a former world – and five-time national – cocktail champion, has little interest in newfangled recipes and avant-garde ingredients. You won’t find homemade bitters or chunks of dry ice at his Star Bar. He probably won’t even tell you about the original cocktails that won him his silverware. He’s likely to suggest something classic – martinis, manhattans, moscow mules and the like. But it’s his execution of those classics that sets him apart. “The recipes are the same from bar to bar, but the results are not,” he says. “Think about red wine. The basic process is the same, yet there’s so much variation in flavour. You can produce sensational wines like Château Lafite and Romanée-Conti. And it’s like that with gimlets. I’m trying to make the Romanée-Conti of gimlets.” Probably, you won’t notice how he does it; that he juices his lemons and limes lengthways, massaging each segment over coarse ceramic to avoid squeezing bitter oils from the skin. Or that his shake pattern changes from drink to drink, adjusting the level of chilling, dilution and size of the bubbles. The figure-of-eight motion of his ‘infinity shake’ is designed to create what he calls ‘micro bubbles’. “Nobody thinks about bubbles when they shake, but they greatly affect the flavour,” he says. In truth, Kishi doesn’t care if you notice his techniques. He says showboating won’t make his drinks any better; that his tricks are behind the scenes and below the surface. And that the proof is in the drinking. Kishi first picked up a cocktail shaker as a 20-year-old student. He quickly found his passion, quit college and enrolled in a bartending school. But it wasn’t until he began training in an elite Ginza bar that he became obsessed. “The first time I ate sushi in Ginza I could tell it was far superior to anything I’d tried before. Then I went to drink whisky and realised I didn’t know how to gauge its quality,” he says. So he studied. Within nine years he was a world champion, and four years after that he turned a Ginza basement into Star Bar. His ‘Romanée-Conti of gimlets’ is more aromatic and less astringent than others. Likewise his sidecar, which has become something of a signature drink. He uses an electric creamer to froth the cognac and triple sec, before shaking with juice and ice. To an untrained eye it looks like cheating; for Kishi, it’s the only way to do it. “You can shake bubbles into a drink, but they disappear fast,” he says. “I wanted to make them last and found the creamer adds air that stays in when you shake, while reducing the alcohol’s piercing bite. It’s like the sushi chef’s nikiri process of bringing his vinegar recipe … END_OF_DOCUMENT_TOKEN_TO_BE_REPLACED

Fumihiko Kimura was on track to become an engineer. When he graduated from university, he found a job at Mitsubishi Heavy Industries. But he lasted just two years. His mother had other plans for him: she wanted him to become a bartender. It was the early 1970s and she was running Kohaku, one of the first western-style bars in Yushima, a former geisha district near Ueno. A discerning crowd patronised the place, including author Yukio Mishima, who liked to sit at the only table and drink gin and tonics. Mrs. Kimura had plans for her son to take over. “I hated the idea,” he says. “I thought working for a company would be more fun, but I didn’t have a choice.” His mother dispatched Kimura to Tokyo’s Palace Hotel to train under one of the era’s great bartenders, a man nicknamed ‘Mr Martini’. Kimura enjoyed the training, the atmosphere, and the camaraderie, but again it ended after two years when he was yanked back to Yushima. Fast-forward four decades and much has changed. The reluctant son has become an obsessive bartender, lauded for his cocktails and vast liquor selection. He says he has around 1,600 bottles – 3,000 counting duplicates – and he knows only roughly where most of them are. Some predate his career, like the tin-capped Haig whisky from 60 years back, or the bottle with a label so faded, it’s near impossible to read that it contains orange bitters. Kimura has contemporary spirits too, but his heart lies wistfully with the golden olden days. “The gins they make now, Scotch, bourbons, rums too, they just don’t have the body they used to,” he says. “My older customers know that, but the vintage bottles are rare and expensive, so I try to find other ways to introduce depth into a cocktail.” He might add brandy where the recipe doesn’t call for it, or a dash of something from Islay. The bitterness of an orange peel helps some drinks, he says. And then there’s his calvados jug, a little brown crock fashioned in France in the 19th century. The intervening century or so has effected some changes. The ornaments have either worn or fallen off. The original cork disintegrated long ago. But inside, something magical is happening. About 20 years ago Kimura filled the jug with a litre of young apple brandy. “Nothing much changed at first,” he says, “and then suddenly it just transformed, both in flavour and in colour.” He hasn’t emptied the jug since. When he serves calvados, he replaces it with spirit from a new bottle. It goes in crisp and alcoholic, swirls around with spirits of years and decades past, teases some 19th-century secrets from the clay, and comes out tasting like something squeezed from an apple pie. Kimura has been wondering whether he could magnify the effect by burying the jug in the ground. If pomegranates are in season the calvados contributes to his Jack Rose, a cocktail more commonly made with grenadine … END_OF_DOCUMENT_TOKEN_TO_BE_REPLACED