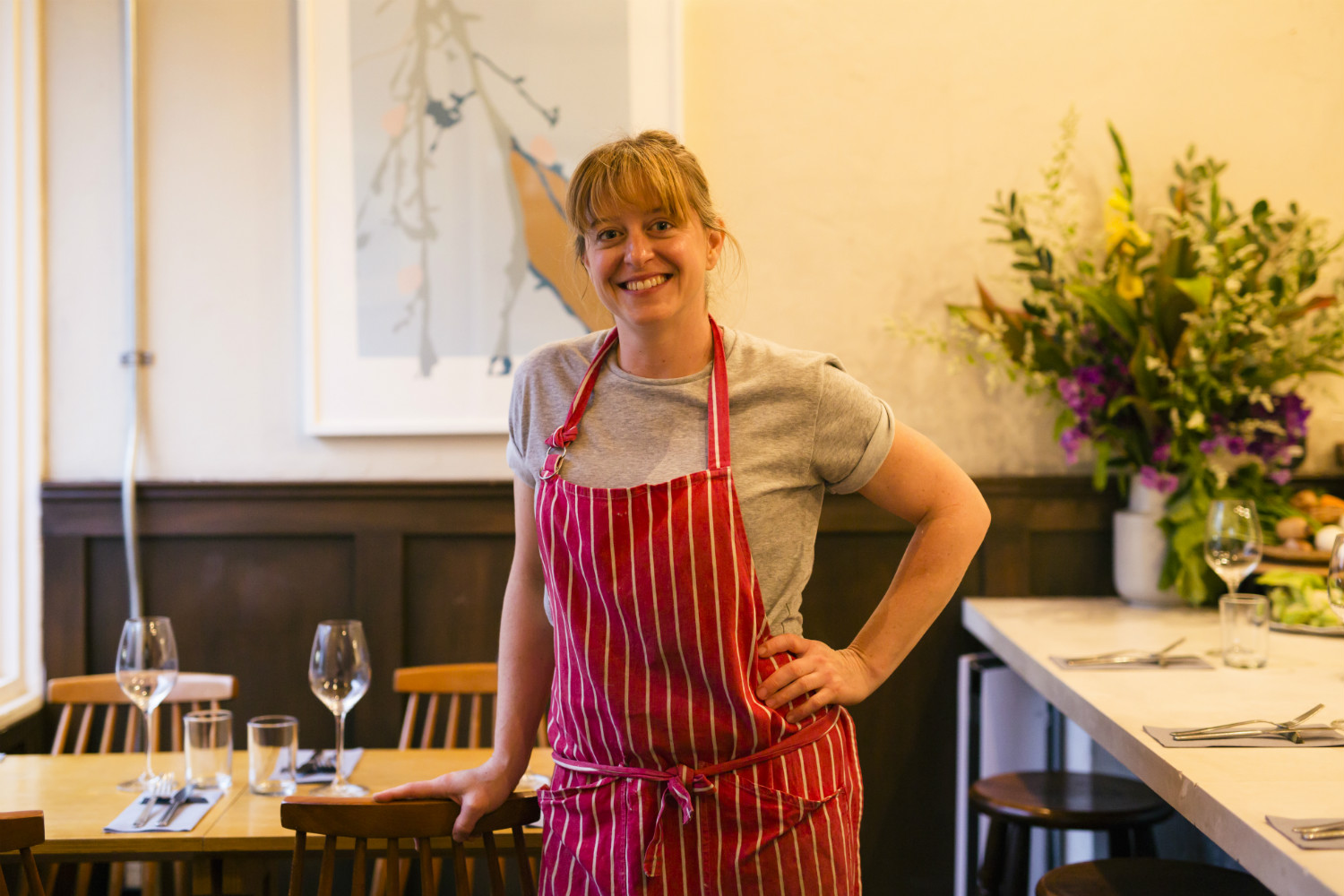 Walking into Locale, a small restaurant near the river in Meguro, customers feel as though they’re entering someone’s home. The chef, Katy Cole, welcomes them with a smile from behind the counter, where other guests—who may have been strangers only moments before—share stories and discuss wine preferences. “It feels like a dinner party every night,” Cole says. The story of how Cole came to open Locale is an unlikely one, full of chance encounters and serendipitous twists of fate. The Los Angeles native spent the first decade of her career cooking in San Francisco. When she first visited Japan on a whim, it was only for a ten-day holiday. Still, she “felt like there was something more,” and six months later she was back again, this time for a longer stay. During that second trip, she began making the connections that would soon lead to her leaving California behind to live in Japan full time. After spending several months doing pop-up cooking events whenever and wherever she could, Cole was hired as the savoury chef to open what would quickly become a popular bakery and cafe in Daikanyama. It was during this time that she learnt that the restaurant that previously occupied Locale’s space would be closing. She immediately put up her hand to take over the lease. “On the second or third day of my first trip to Japan, I came here and sat at this counter and thought, I would love to have a restaurant like this one day,” she says. Over time she became friends with the owner of that restaurant, and even though he questioned whether she would be able to make the space work for her, she knew she was going to try. And not only did she try, she succeeded. “I opened the restaurant four years to the day from when I came here the first time,” Cole says. At Locale, vegetables take centre stage. Every week, the restaurant gets deliveries from small farms across Japan, the contents of which are unknown until they are opened. It is only at this time that the chef begins planning the menu, which changes slightly each day. “We use such special ingredients and the farmers put a lot of care and energy into what they’re growing, and for me to peel it all away or make it into some other shape seems like a little bit of a waste to me,” Cole says. “The quality of the vegetables is so nice, I don’t need to do too much to them. So I guess my philosophy is just that simple is best.” A night at Locale might see a menu that includes colourful roasted vegetables with cashew cream, lentils and avocado with a bright pink sauce made of yogurt and shibazuke pickles, Spanish mackerel with quinoa and roasted root vegetables, and pork shoulder with whipped taro root and greens. “I feel that everything sort of comes together, from the honesty of the people growing the vegetables, to serving … END_OF_DOCUMENT_TOKEN_TO_BE_REPLACED

Completed in 1933, the property that is now home to the Tokyo Metropolitan Teien Art Museum was originally the private residence of Prince Asaka and his wife, who became fascinated by Art Deco while living in Paris in the early 1920s. The couple commissioned Henri Rapin to design many of the home’s interiors, and Rapin enlisted the help of other prominent artists of the time, including René Lalique. “At the time, Japanese people greatly admired and dreamt of Western Europe,” says Toyojiro Hida. “And this building is a realisation of those dreams, of true French Art Deco style. I want visitors to feel how that dream was realised when they visit the museum.” Hida has over four decades of experience in the art world, but only since taking over as director of the Teien Museum in 2016 has he come to realise the significance of decoration as a field of art. “There’s a paradigm that starts with fine art, then decorative arts, then architecture and design,” he says. “But that paradigm has no relation to this museum. This place is more free, more open than that, which is its biggest appeal.” The inspiration for dedicating the Teien Museum to decoration—not decorative arts—came from the building itself, which is one of Japan’s best examples of Art Deco design. Walking through the front entrance hall with its striking Lalique glass-relief doors and mosaic floor and into the walnut-panelled great hall, it’s hard not to imagine scenes of Gatsby-esque splendour. Hida says his favourite piece in the museum is what is known as the ‘Perfume Tower,’ a Rapin creation named for its original purpose as a fountain that also filled the space with the princess’s preferred scents. Other significant elements of the building’s design include chandeliers by Lalique, wall paintings by Rapin, reliefs by Ivan-Léon Alexandre Blanchot, etched glass doors by Max Ingrand, and iron decorations by Raymond Subes above some doors. The majority of the building’s design elements and furniture are original, commissioned specifically to fit the architecture designed by Yokichi Gondo. “The building is the result of cooperation between Japanese and French craftspeople and designers, who worked together to complete it,” Hida says. “And the impressive thing is that the French artists never came here and saw the house in person. Everything was done by sending ideas back and forth via post.” The Teien’s remarkable design forms a stunning backdrop for displaying a wide variety of pieces spanning various disciplines, eras and continents. Previous exhibits have ranged from French picture books to Brazilian indigenous benches. “Art Deco was created by the French bourgeoisie, and the bourgeoisie were very democratic. They took in everything, from Brazilian ebony trees to decorations from the Nile region in Africa, in order to create the culture of Art Deco in Paris. So since the original concept of Art Deco was kind of that anything goes, anything can look at home in this space. As long as the decoration is clearly expressed, it works.” Hida says. “Decoration … END_OF_DOCUMENT_TOKEN_TO_BE_REPLACED