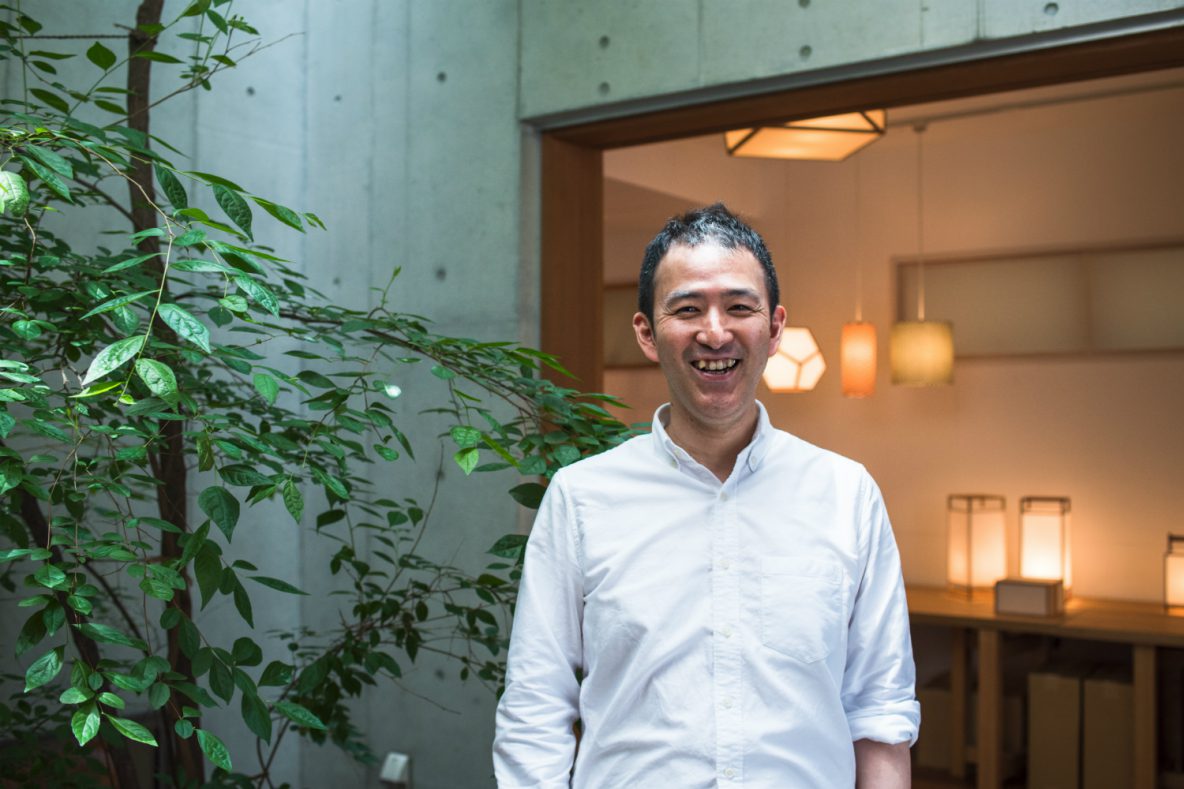 [Please make a reservation before visiting Miyako Andon.] A wooden model of an old Japanese house – complete with tiny sliding screens – sits in the corner of Masanori Kizaki’s office. With the flick of a switch, the house illuminates. “My ancestors built models like this as souvenirs for the foreigners who came to Japan after the war,” says Kizaki, the fourth generation of his family to lead their handcrafted lamp business, Miyako Andon. These days, Kizaki’s contemporary lamps – made using similarly detailed Japanese woodwork and joinery techniques, but updated with the his own modern sensibilities – also find their way into homes around the world. “These ones are going to New York City,” he says, pointing at two minimalist cubes destined to hang in a Manhattan kitchen. “A very particular customer.” The business dates from the late 19th Century when Kizaki’s great grandfather was a ‘shokunin’ (artisan) making delicately latticed, painstakingly assembled wooden screens known as ‘kumiko’. His son – Kizaki’s grandfather – began manufacturing lamps before World War Two, and continued selling them afterwards to Americans in the Allied occupation force. An ‘andon’ is a traditional, wood-framed, paper-sided lamp that originally would have contained a small vessel of burning oil as a source of light. Some ‘andon’ were portable and could be carried from room to room, or out into the streets at night. With electrification, however, their utility faded. “In postwar Japan, most people lived in cluttered apartments with pre-installed ceiling lights,” observes Kizaki. “But the younger generation is starting to think more about design.” Kizaki has always thought that way. When he was a student, he would spend his weekends in Tokyo’s fashionable west side – in Aoyama, Omotesando and Daikanyama – soaking up the new fashions and modern architecture. The clean lines and pure geometry of his products reflect his passion for structures and spaces. The Tsukika lamp, a globe of interlocking, paper-covered triangles is his most recognizable design. “Every component comes from another artisan: the wood from northern Japan, the ‘washi’ paper from Shikoku,” he says, referring to a large island in western Japan. “In other lamps, instead of paper we use patterned cloths hand-dyed by a craftsman here in Tokyo.” At his office, a short taxi ride from Nippori railway station, the old and the new stand side by side. The showroom (viewable by appointment) is a simple concrete box – with a void filled by natural light at its core – built to Kizaki’s own plan. The classic Mini Cooper parked outside? That’s his too. Next-door is the old workshop, with sawing machines, wood presses and lamp skeletons, stacked high and waiting to be papered. The company’s seven workers includes five members of the Kizaki family – among them the craftsman’s wife, Toshiko, who speaks fluent English and handles international sales. “To be a successful ‘shokunin’ these days, it’s not enough just to make beautiful and enduring things,” says Kizaki, the last traditional ‘andon’ maker in Tokyo. “You need to adapt … END_OF_DOCUMENT_TOKEN_TO_BE_REPLACED 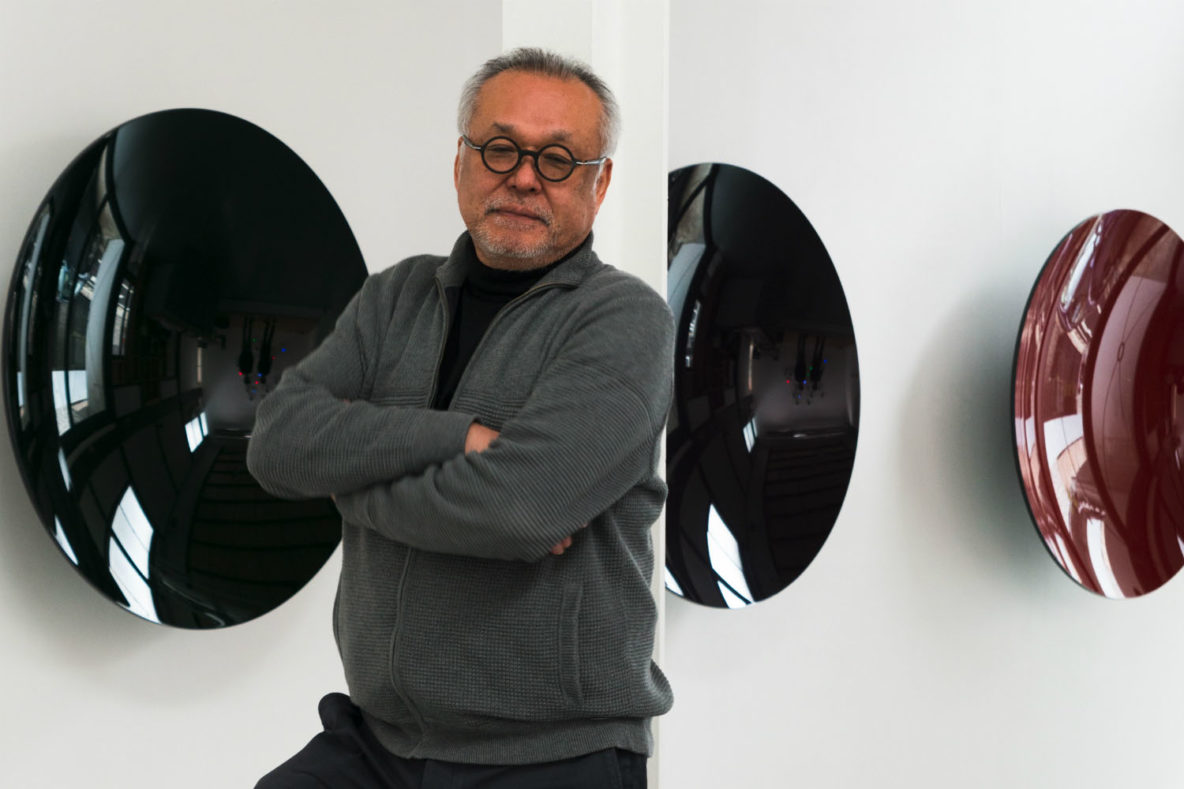 One of Tokyo’s foremost galleries for contemporary Japanese artists, SCAI The Bathhouse has, as its name suggests, remarkable premises. “It turns out a disused bathhouse makes an ideal art gallery,” says director Masami Shiraishi. “It has natural light, high ceilings, and plenty of the ‘air’ that showing contemporary art requires.” Until the nation’s economic modernisation following World War II, every district shared a bathhouse where neighbours would wash, in the Japanese manner, first scrubbing themselves clean before jumping into a communal tub to soak and share news and gossip. But though in recent decades, Tokyo’s bathhouses have become largely demolished, and in 1993 the charming one found in Yanaka, a quiet corner of old Tokyo, was saved and repurposed as a gallery. “Since the younger generation of Japanese contemporary artists such as Takashi Murakami came to the fore, Japan is on the world art map,” says Shiraishi, a former deputy director of the Museum of Contemporary Art Tokyo, and founder of what’s now known as Art Fair Tokyo. “It has been a big change.” Murakami is one of a number of big names on Shiraishi’s roster, alongside Anish Kapoor and Julian Opie. But one of the biggest challenges for contemporary art gallerists like Shiraishi is how small the domestic art market has become. “People now are very interested in Japan and are looking for good Japanese art. But so many of our most talented artists leave our shores. They become accepted by the international art world, and don’t come back.” Fortunate, then, that the gallery is located near the prestigious Tokyo National University of Fine Arts and Music, and is a short walk from the museums of Ueno Park. With it the founder hoped to create more than just an exhibition space – he envisioned the sort of place that is common overseas but rare in Japan: a platform for supporting the top contemporary artists. And so today SCAI The Bathhouse represents internationally recognised talent, including the Japan-based Korean painter and sculptor Lee Ufan, glass bead installation artist Kohei Nawa, and the young multimedia artist Daisuke Ohba. Shiraishi says Nawa is one of his most successful discoveries. “He’s very contemporary because his work reflects social and technological trends of our time,” he explains. “For a long time, Japanese artists wanted to express or explain Japan through their work – to ask questions about our identity. Nawa’s thinking is very international, but is still unique.” While the gallerist chides the Japanese government for not providing adequate support to Japanese contemporary artists, he hopes SCAI The Bathhouse can help in its own way. “This neighbourhood bathhouse was a place where people in the community could not only take a bath but also gather, talk and find out what was happening around them,” says Shiraishi. “Its history is appropriate to its new identity. I think SCAI has the same purpose today.”