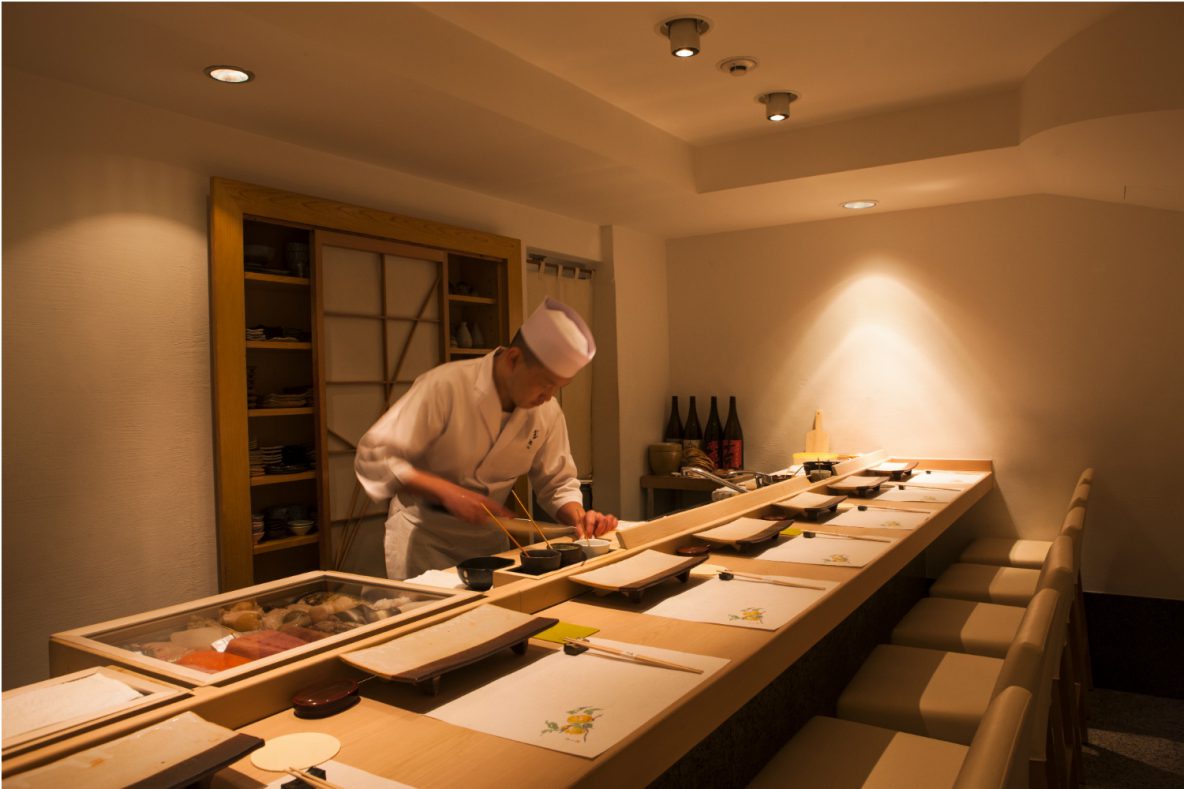 When Masakatsu Oka decided he wanted to become a sushi chef, he knew there was something he needed to fix. Lacking neither passion nor commitment, it was in a sense his body that looked set to let him down. “It’s because, truth be told, I’m left-handed,” confesses Oka, a trait that even today is considered undignified by some Japanese. Not wanting this perceived weakness to ruin his culinary ambitions, Oka could be found nightly practising cutting cabbage into thin strips with his right hand until, in his words, “I no longer feared the knife.” It clearly worked. He moves the blade with swift, deft strokes, lightly scoring a slice of squid with dozens of fine, diagonal cuts. He angles his knife to the right, and repeats the action in the other direction to make a crisscross pattern so that when the flesh touches one’s tongue, it feels like it’s melting. But Oka credits his skills less to his late-night cabbage training and more to his mentor, Keiji Nakazawa of Sushisho (p.XX). “Nakazawa-san is the person I respect most,” Oka says. “If I hadn’t met him, this restaurant wouldn’t exist.” Sushisho Masa, the name of Oka’s restaurant, is testament to that. The practice is known as noren-wake, or ‘dividing the noren’ – the noren being the curtain above the door that bears a restaurant’s name. By permitting him to use the Sushisho name, the mentor gives a public blessing to his acolyte’s new venture, indicating that the young man is equipped to safeguard his legacy. An honour of that level must be earned, and Oka is no stranger to hard work. He says that losing his mother at an early age taught him to be independent. And that the punishing schedule of his early years learning the sushi trade – starting work at 7.30am, and ending around midnight – was a lesson in endurance. “Find out how far you can push yourself and then push even further,” he says, sounding more marathon runner than chef. Indeed, as he works behind Sushisho Masa’s cosy seven-seat counter, Oka controls every movement and every breath. As the cuts of his knife create a staccato rhythm, his words meet the beat, becoming almost meditative as he describes each dish: aji (horse mackerel) is served with a dab of acidic hacchomiso, a deeply flavoured dark miso from Western Japan; rectangles of katsuo (bonito) come sandwiching paper-thin slices of garlic marinated in soy sauce to mellow the taste; and his decadent signature dish of three succulent slices of o-toro lightly layered with wasabi to create what he calls the ‘Masa-feuille’. Oka’s eyes twinkle as he presents rare ingredients such as grilled anago liver, or octopus eggs simmered in dashi – all likely to surprise even the most dedicated lover of sushi. “I always keep my eyes open for new ideas. That’s what I try to teach my guys,” he says, gesturing towards his staff of three young apprentices. “I want them to become the kind of people … END_OF_DOCUMENT_TOKEN_TO_BE_REPLACED 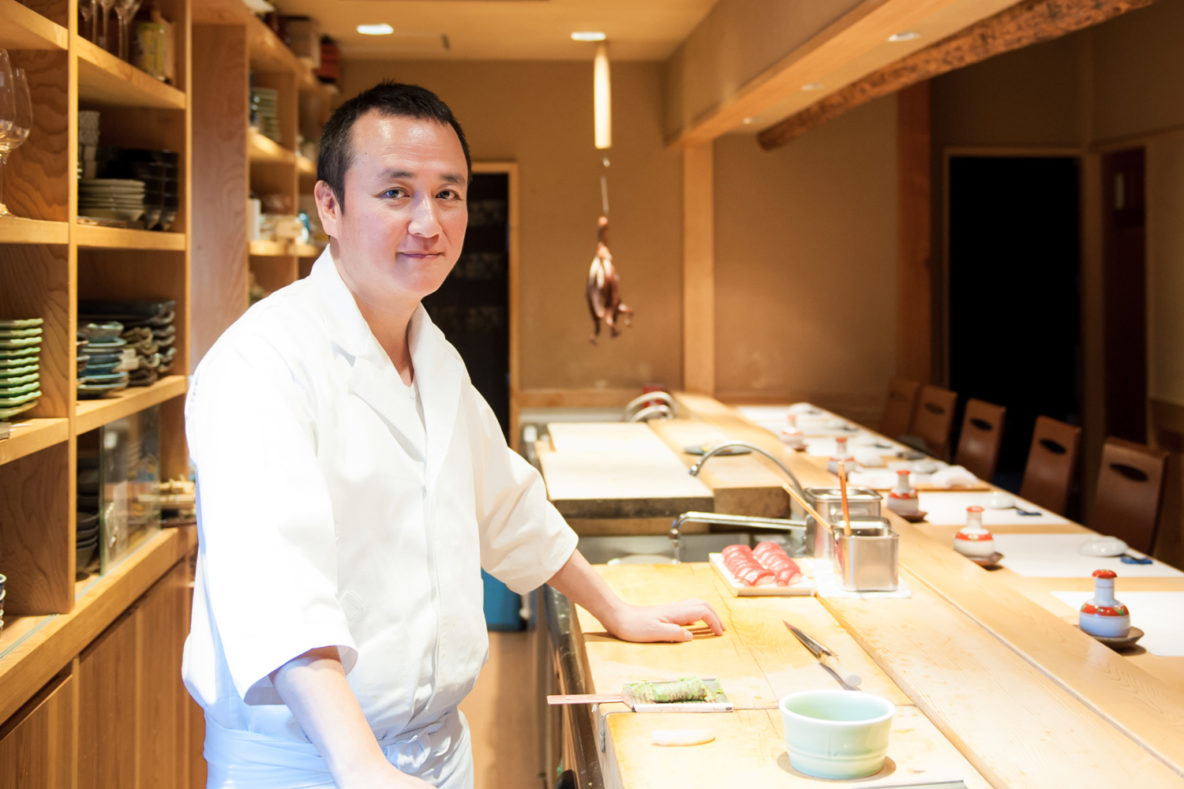 Daisuke Shimazaki cradles in his hands two giant shrimps, just boiled and ready to serve. “Yesterday they were swimming in the ocean,” he says, his voice hushed, poised to reveal a secret. “Fresh from northern Japan. The best in the world… maybe.” That phrase is heard frequently at Sushi Yuu, Shimazaki’s family-run restaurant. His sea urchin and his fatty tuna are also “the best in the world… maybe” – although his confident tone of voice infers that there is, in fact, no ‘maybe’ about it. Shimazaki’s late father, Shojiro, opened Sushi Yuu in 1972 in a distant suburb, later moving his shop to central Tokyo. His wife – Shimazaki’s mother – still helps from behind the scenes, bottling her annual batch of plum wine, or helping to pickle the ‘gari’ ginger so adored by regulars. The son was initially reluctant to follow in his father’s footsteps. The family’s restaurant was close to the bars and nightclubs of Roppongi – a neon-lit playground for high-rolling businessmen. Young Daisuke wanted a life on the other side of the counter. “But it turned out I was a terrible businessman,” he says. Within a year, he was in the kitchen, watching his father work. “He rarely spoke – it was a case of look and learn. That was the way back then.” Shimazaki knows that a chef is only as good as his ingredients. To get his hands on the best fish, he depends on a network of traders, each of them a specialist – in tuna, squid, or sea urchin. He visits them at the fish market every morning. “If there’s something special coming in, they’ll call to give me a head’s up,” he says. “But I still need to see things with my own eyes.” Shimazaki’s sushi reflects his personality: it is uncomplicated and generous. His preparations are simple, his cuts are large, and his rice has bite. A giant Hokkaido oyster is his recommended starter when they are in season. Always on the menu is his father’s signature ‘himono’ –mackerel, rigorously salted, dried in the open air, and grilled until its buttery juices begin to ooze. In place of dessert, expect a slice of ‘tamagoyaki’ omelette – sweet, and with a hint of citrus. Shimazaki balances his dedication to his craft with other passions outside the kitchen – fast cars, fine whiskeys, and the occasional round of golf. A confident English speaker, he converses with his customers from all over the world as dexterously as he creates their meals. “If people want to stay here talking and drinking until the small hours, they’re very welcome,” he says. And with only one sitting per evening, at Sushi Yuu there is no need to watch the clock. 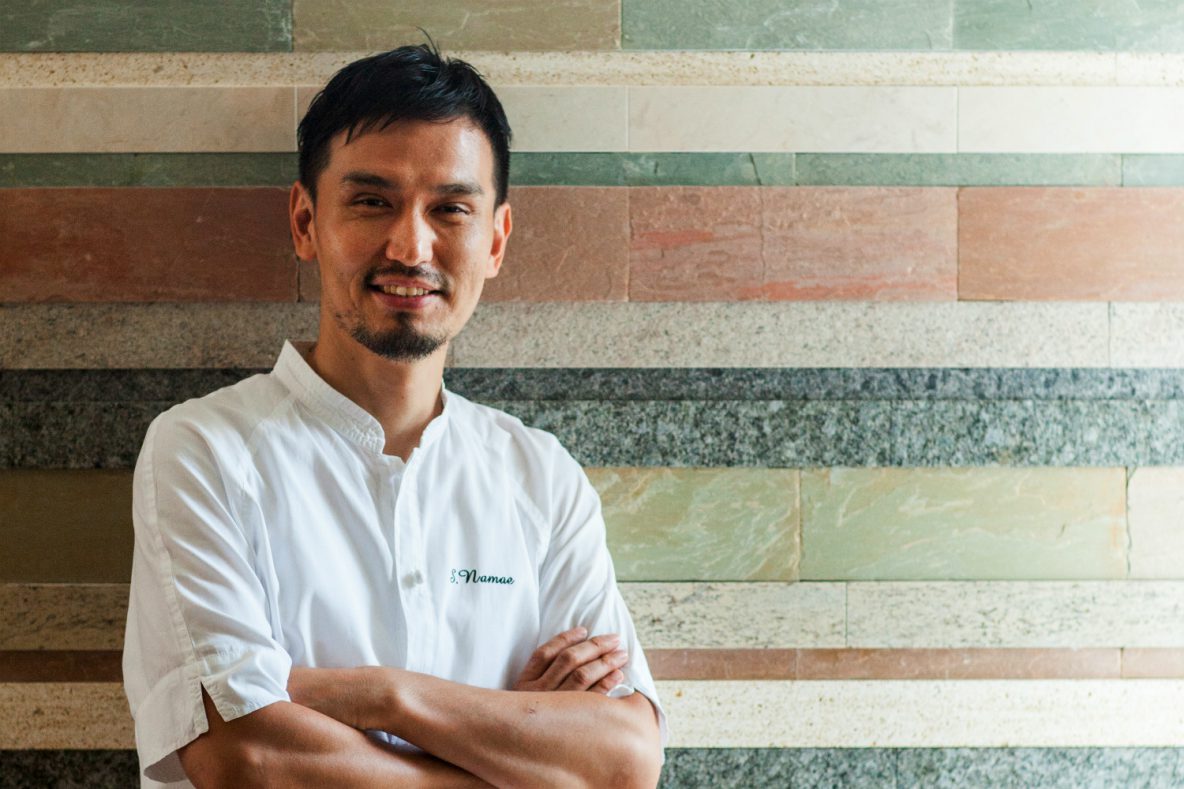 As a young man in Japan, Shinobu Namae always knew he was living in a bubble. “It was very convenient here, very efficient,” says the youthful executive chef of L’Effervescence with characteristic self-awareness. “I appreciated that. But I also knew Japan was a bit sterile.” Namae was determined to travel, and foraged for a career that would satisfy his inquisitive instincts. He intended to become a journalist. Then he was obsessed with Italy – “I wanted to be Italian.” But it was on holiday near San Francisco, while dining at Chez Panisse, that he encountered his true calling. “A simple arugula salad, garlic soup, beef sirloin with basil paste… Even now, I can remember every flavour,” he recalls of the meal at Alice Waters’ iconic Californian restaurant. “I never imagined I could get such satisfaction from a salad.” More than a decade later, on the other side of the Pacific, Namae set out to offer every guest at his own restaurant a distinct memory of time and place. For his ebullient project, he chose a tantalising name: L’Effervescence. The location he secured is refreshingly roomy for Japan’s cramped capital, where space itself is a luxury. During each sitting, the chef makes sure to visit every table and personally greet and thank his patrons for coming. “I’m grateful for every moment,” he says. “For me, work is life, and life is work, and I wouldn’t have it any other way.” On a plate called ‘Beautiful Scene of Summer’, two small local freshwater fish known as ayu (sweetfish) appear to be jumping along a stream of sunshine – a picture painted with mango, radish and a mountain of sansho pepper, and with a powerful spot of ‘guts-flavoured gastric sauce.’ On ‘Transparency,’ airy foie gras, garnished with grapes, celery and walnuts, seems ephemeral enough to almost vanish before the first bite. Nominally French, Namae’s food also reflects his youthful Italian fetish; the influence of his two celebrated tutors, Michel Bras and Heston Blumenthal; and, from his home country, strong seasonal rhythms. His microscopic attention to detail comes from his father, a stern, introverted man who designed microchips sitting behind a blueprint-covered desk. It was his mother who taught him to take pleasure in food. “Honestly she isn’t a great cook,” he says. “But she loves to explore new restaurants. She appreciates every mouthful and every moment.” Softly spoken yet candid, Namae confesses to having a rebellious streak. After graduating from university with a degree in politics and social psychology, his decision to cook for a living went against the wishes of his father. Now in his early forties, he is one of several rising-star chefs unafraid to challenge the boundaries of his native culture. “I grew up just as Japan’s bubble economy was bursting. Since then things haven’t always gone well for us Japanese,” he says. “So we needed to learn to do things differently, and to enjoy ourselves along the way. We needed this culinary revolution.” In late 2013, Chef Namae attended … END_OF_DOCUMENT_TOKEN_TO_BE_REPLACED